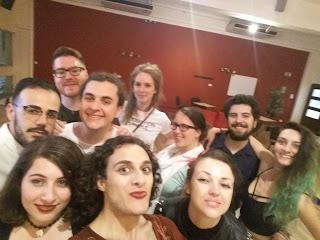 The day has finally arrived; in less than an hour, the We Are Annual General Meeting 2017-2018 will officially commence!

The AGM will be held as follows:

Appointment of Chair.
Julian Chircop (President) will nominate Clayton Mercieca as Chair of the meeting.
Votes against, abstentions?

Appointment of Minute Taker.
If no else volunteers, Julian will take minutes.
Votes against, abstentions?

> Approval of Agenda.
The Chair will read the following for the agenda of the meeting.
Votes against, abstentions?

> Approval of Minutes.
The Chair will read the minutes of last year’s AGM.
Votes against, abstentions?

> Matters arising out of Minutes.
The Chair will ask if there is anything that is not clear, otherwise the AGM may proceed.

> Administrative Report for the year.
Each current Executive Board member will speak about their section briefly.

> Financial Report.
Julian will speak about the finances.

> Amendments to statute.
Julian will declare that, following consultation from the legal office of the University of Malta, amendments to the statute will not be addressed in the upcoming AGM due to the nature and quantity of amendments proposed. We Are wishes to dedicate the required time and attention in amending these proposals with the representative of the University of Malta’s legal office according to the Student Regulations.
Votes against, abstentions?

> Election of Electoral Commission (Chair and additional person to count the votes together, ideally someone outside the organisation).
-> Nominations and presentation of the candidates for the incoming Executive Board.
The Chair will declare that We Are received a total of six nominations.

> Election of Executive.
Since there is an equal number of nominations for the executive board, there will be no need for a vote.

We look forward to seeing you at our AGM; come and show your support, my chickies! Put on your shades and let's read, Honey Bee! The We Are AGM 2018 is approaching!

t's that time again: We Are, the University of Malta LGBTQI+ student organisation, is looking for new recruits to form part of its Executive team for the upcoming 2018/19 scholastic year. Our rainbow-coloured executive needs new, fresh and colourful flowers to widen our garden and promote student activism towards LGBT rights (amongst all genders, sexes, and types of sexuality). If you're interested in being involved in a student organisation, then this is the opportunity to meet us at our Annual General Meeting on the 31st July 2018 at 18:00-20:30 at the KNZ Office, 50 Lion Street in Floriana. The agenda for the AGM will include the election of a new executive board as well as the approval of proposed amendments to the current We Are statute, last amended in September 2017. Any other issues proposed for inclusion on our agenda and statutory amendments should be sent by email to weareuom@gmail.com by no later than Monday 30th July. People who wish to apply for a role must be nominated by another member of We Are. The closing date for all nominations of people wishing to contest the election to the We Are executive board is on Monday 30th July 2018 till 23:59.All nominations should be sent by email by the person nominating the candidate to weareuom@gmail.com, and CC'ing the candidate's email. Both the candidate and the person nominating them must be a current member of We Are. This includes both regular members as well as Executive members. If you have already emailed your interest in an executive role, then an email from a member of We Are to nominate you must be sent, also CC'ing your email.The email must contain the following:> ID number and full name of the candidate being nominated.> ID number and full name of the person nominating them.The candidate must then send a follow-up email which includes their position/role of interest, and a motivational letter on why they want to be part of the executive team of We Are. Members unable to attend the AGM will be able to vote by proxy, provided that they send an email to weareuom@gmail.com by 12:00, Tuesday 31st July. The email must contain the name and ID card number of the person who is being granted the proxy. The said person must also be CC'ed in the email and acknowledge acceptance of the proxy. Any person may hold no more than one other person's proxy. For the sake of establishing whether or not a quorum has been reached persons holding a proxy will be counted both in their personal capacity and in that of the proxy which they hold.The agenda of the Annual General Meeting is as follows:>Appointment of Chair.>Approval of Agenda.>Approval of Minutes.>Matters arising out of Minutes.>2017/18 Administrative Report.>2017/18 Financial Report.>Election of Electoral Commission.>Nominations and presentation of the candidates for the incoming Executive Board.>Election of 2018/19 Executive.


Following consultation from the legal office of the University of Malta, amendments to the statute will not be addressed in the AGm due to the nature and quantity of amendments proposed.
We Are wishes to dedicate the required time and attention in amending these proposals with the representative of the University of Malta’s legal office, in accordance with the Student Regulations.
The amendments will be announced during the EGM which will take place in September 2018 (date to be confirmed).
We Are would also like to remind the public that membership applications will close the day before the event (30th July 2018, 23:59). Anyone applying on the 31st July from 00:00 onward will not be considered a member, in accordance with the We Are statute. Membership will reopen after the AGM has ended at 20:30 on 31st July. Don't forget to click 'Going' and promote the event by sharing with your friends on We Are AGM 2018 -Facebook Event and keep in touch for any updates!
We look forward to seeing you all!
at 8:52 AM No comments: