This April, Mina comments on the need for more representation of LGBT in the (mainstream) media, and LGBT representation in web based medium, like comics and series!

------------
It has always been rather  hard to find positive LGBT(etc...) characters in the media, and although things are changing, things might still be a far cry away from ideal.

I could mention 'Glee', 'The New Normal', 'Bomb Girls', 'Chicago Fire' and 'Lost Girl' but if you really want to read about them you could always just head to relevant pop-culture websites.
So instead I'll be focusing on reviewing some free (!) LGBT or LGBT-friendly web comics. I'll be mentioning  web comics that I've read, am reading, or relate to. But I do know that there is much more queer-positive material out there, so feel free to keep these as starting points!

1. Girls With Slingshots by Danielle Corsetto
This is currently my favourite web-comic out there. It is not LGBT-focused but does have      some characters and story arcs which focus around the lives of some of the characters in the comic.
For starters Thea and Mimi! A cute lesbian couple whose story starts from the 4th panel in the image here:  And continues and develops to the point where they're teaching Hazel (the straight protagonist of GWS) about lesbian sex;

Jeph Jacques had this to say about Claire's coming out:

"I have to admit, I am nervous about posting this comic, because including a trans person in my cast is something I have wanted to do for years and I really, really want to do a good job of it. One of the major themes of QC, I think, is of inclusion, and this seemed like a pretty important thing to include. I have given it a lot of thought and done a lot of research, so hopefully I won't screw up. I'll do my best, anyway."

Email ThisBlogThis!Share to TwitterShare to FacebookShare to Pinterest
Labels: blog of the month, books, comics

Bullying can have a significant negative impact on the educational development of lesbian, gay, bisexual and transgender (LGBT) students, and those who participated in a debate on campus yesterday afternoon stressed that the necessary measures need to be taken to ensure that LGBT people are not denied their basic right to education because of bullying in school.

The debate, entitled 'Breaking the Silence: Spotlight on the Fight against Homophobia and Transphobia', was organised to mark the Day of Silence (19th April) - a day of action in which various schools around the world take a day-long vow of silence to call attention to the silencing effect of anti-LGBT bullying and harassment in schools. The event was organised by the European Parliament Information Office in Malta together with university student organisations 'Studenti Ħarsien Soċjali' and 'We Are'.

Peter Agius, head of the European Parliament Information Office in Malta, noted that the European Parliament is very active on LGBT issues; in fact it has an Intergroup on LGBT Rights, which is made up of 153 MEPs, from six political groups, who are committed to upholding the fundamental rights of LGBT people. Members of the intergroup would usually take a positive stance on LGBT issues when they draft reports or amendments, when they vote in the Parliament, or when they deal with constituency affairs. 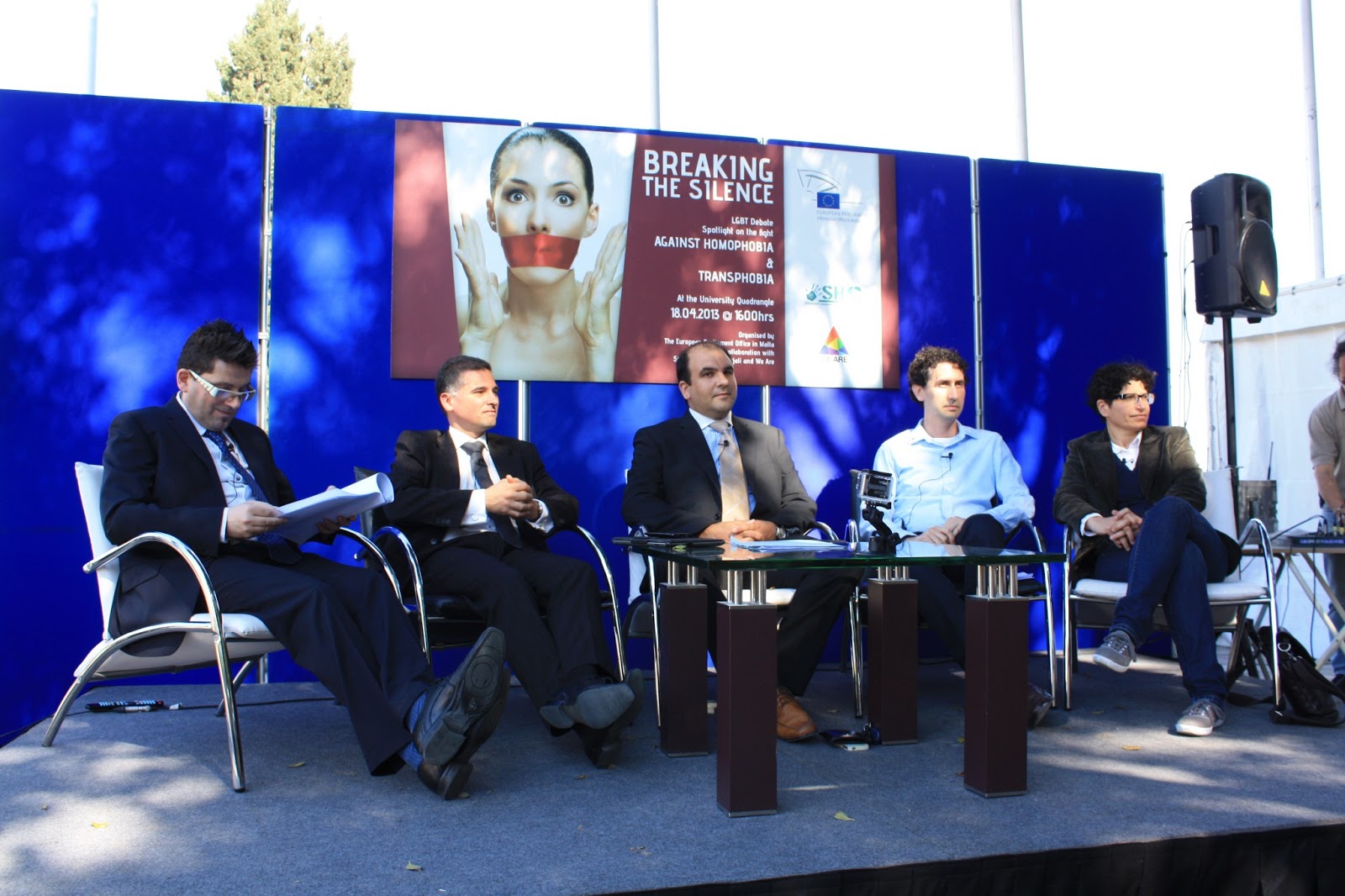 Dr Agius also mentioned the fact that last month the European Parliament adopted a non-binding resolution to strengthen the fight against racism, xenophobia and hate crime. The text calls on the European Commission to add homophobia and transphobia to the list of EU-sanctioned hate speech and violence.


Dr Agius said the EU Agency for Fundamental Rights has conducted an LGBT hate crime and discrimination survey, and the findings will be presented on the International Day against Homophobia and Transphobia on 17 May, during a conference hosted by the Dutch government in The Hague. Around 93,000 LGBT people from all across the EU and Croatia completed the survey, making it the largest and most comprehensive survey of its kind to date. LGBT people were asked whether they had experienced discrimination, violence, verbal abuse or hate speech on the grounds of their sexual orientation or gender identity.

Gabi Calleja, coordinator of the Malta Gay Rights Movement (MGRM), and Mario Gerada from Drachma Malta, a Catholic group for LGBT, pointed out that homophobic and transphobic bullying is a reality that exists in schools, as well as in post-secondary and tertiary institutions. Mr Gerada also mentioned Drachma Parents Group, a group of parents and relatives of LGBT people who seek to give hope to those who may still be finding it difficult to come to terms with their loved one's sexuality.

Bernard Caruana, a pscyhologist, explained that homophobic and transphobic bullying can result in LGBT students failing to reach their full potential. He stressed that legal amendments aimed at ensuring that LGBT people's rights are respected need to be complemented by a change in people's attitudes.

Lawyer David Camilleri from Jose' A Herrera & Associates Advocates, spoke about the case of Joanne Cassar, a post-op transgender woman who has been fighting for her right to get married for the last seven years and even took her case to the European Court for Human Rights. She recently signed a settlement agreement with the government, meaning that she has now been given the right to get married and will also be given compensation.

During the debate, Jonathan Brimmer, a spokesman for the Ministry of Social Dialogue, Consumer Affairs and Civil Liberties, announced that the government will be setting up an LGBT consultative council on Monday. The council will be made up of NGOs working in the field of LGBT rights and will be tasked with drafting legislation. Mr Brimmer said the council's priorities will be the civil unions Bill, followed by the gender identity Bill. 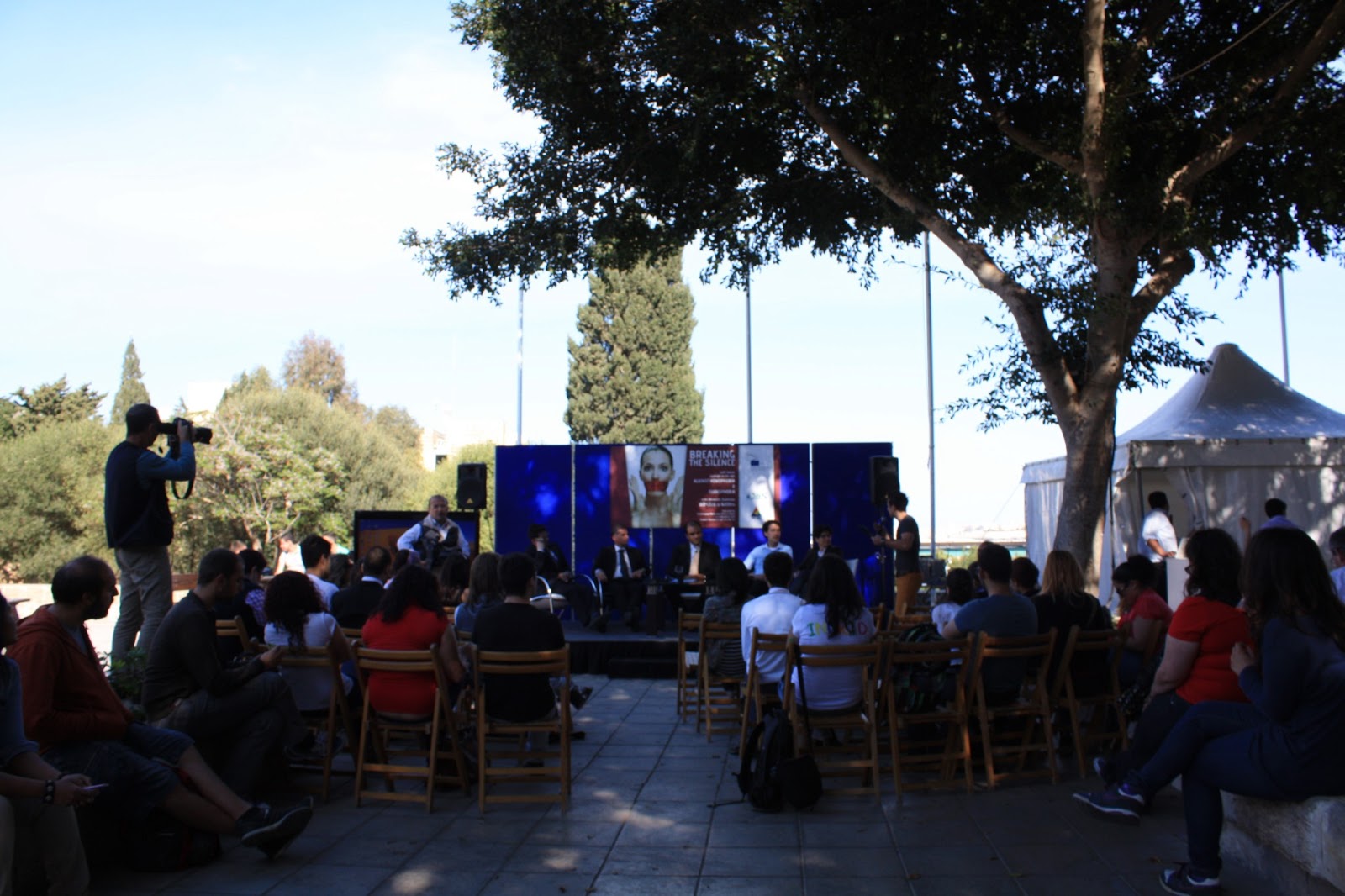 The following video clips were screened during the debate, which was moderated by Kevin Mercieca:

We Are events, and news from April!

We have a lot of exciting events coming up this month, as well as some juicy updates which we shall be releasing over the next week!

Consultative Council discussion group
We Are has been invited to contribute to the consultative council which has been set up by the Ministry for Social Dialogue, Consumer Affairs and Civil Liberties to discuss LGBT rights.
Paul and Luisa will be representing We Are on the council but we want to include our members in discussing and going over points before representing them.
If you'd like participate in these internal discussions with Paul and Luisa, and the rest of We Are, drop us a line by e-mail and we'll be in touch!

Weekly Gatherings
Join us on Friday 12th April at 12:00, (19th April and 26th April at 13:00) in our safe-space office at Student House for a weekly gathering - we will have coffee, snacks & some cool discussions.

Movie Screenings
This Friday 12th April we are also re-screening the documentary Intersexions, in collaboration with the Queer Studies course, and MMSA, the Malta Medical Students Association, at the KSU Common Room at 18:00. More information about that here!
Next Monday 15th April we are screening Shrek, at 18:00 at the KSU Common Room, also in collaboration with the Queer Studies course.. If you are asking what Shrek has got to do with Queer Studies, you will just need to come along to the screening and find out yourselves in the discussion afterwards. More information about this here!
Then on Monday 22nd, we are screening another movie - X Men First Class... Once again, if you're asking why? Let Ruth﻿ answer your questions after the movie.
Breaking the Silence - LGBT Debate
On Thursday 18th in collaboration with SHS (Studenti Harsiena Socjali) and the European parliament office in Malta, we have a big debate on LGBT bullying - Breaking the Silence. For more information on this event, look here!