I cannot believe it has been three years since that infamous first meeting in one of the old computer labs in a dark basement on campus. We Are has come a long way since then, not only as a University based organisation but also reaching out to the community nationwide.  What started off as a small organisation of friends grew into one large, diverse (and certainly unique) family.

This year we have expanded our reach by holding some of our yearly events at other post-secondary education institutions, like Flowers for Friendship at GCHSS and Junior College.  Because of this we have been invited to hold talks with the guidance office in order for us to collaborate on some events, like workshops and seminars, in the future.

Through all our adventures this year one thing has remained apparent: We Are is still a very much needed organisation. Although things in Malta are slowly getting better for LGBTQQI individuals, there are still people who feel like they do not belong and have no one to turn to for support. This organisation is there for them, as always, providing a safe space to explore their sexuality and gender identity as well as answering any queries and providing information to help them along this journey.

Although we have certainly come a long way, there is still work to be done so that We Are can continue to grow, like furthering community support and increasing community events as well as contributing further on the consultative council in order to ensure that we are able to help improve the situation in Malta for anyone who falls under the LGBTQQI umbrella.

Member support is crucial, which is why I would like to thank all those who took an active interest in the organisation this year. Without these dedicated individuals many of our events would not have been successful.  One cannot forget to mention all the support from the US Embassy, MGRM, our food sponsor The Wembley Store, IGLYO and all other organisations that provided invaluable input and assistance. 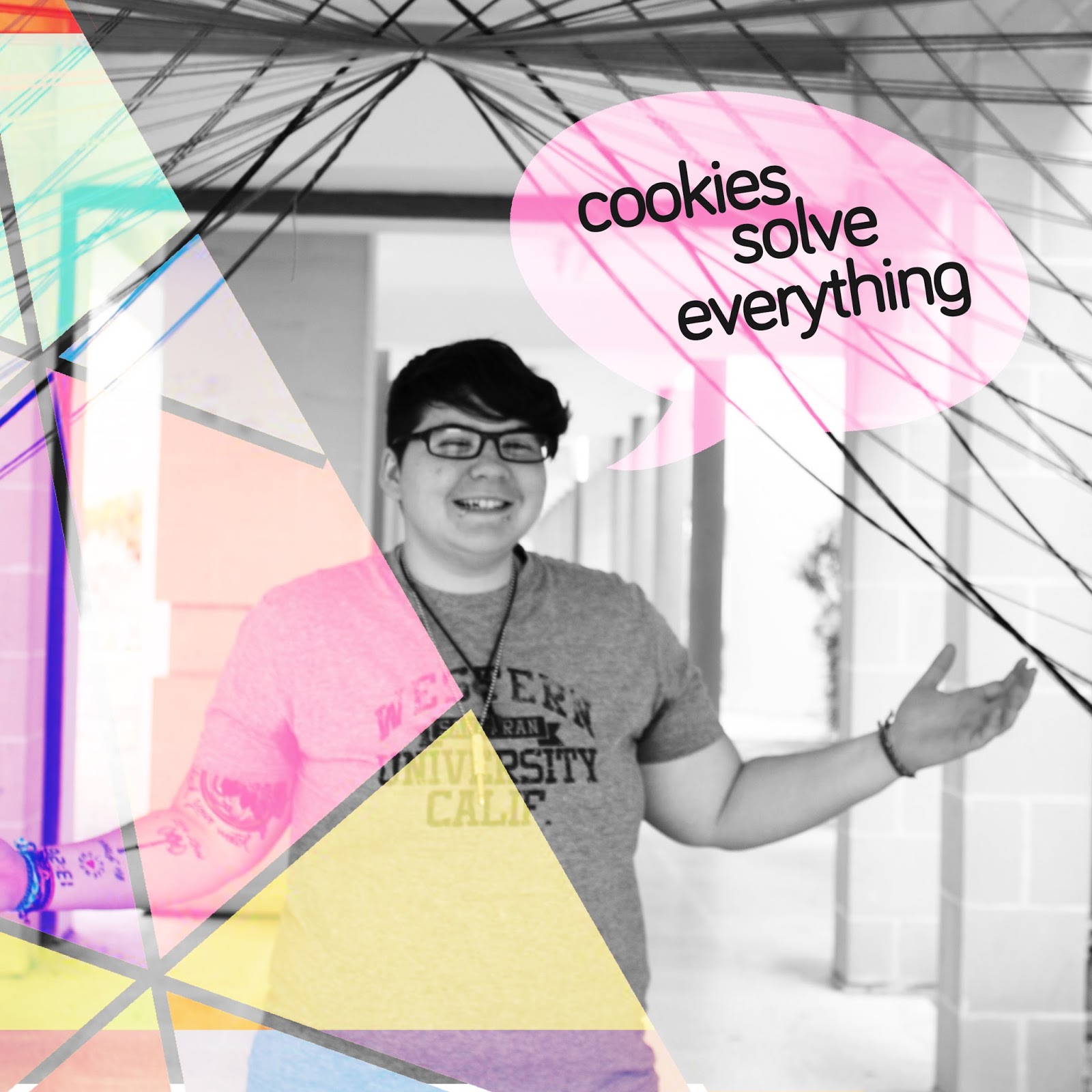 As this will be my final year volunteering with We Are due to my studies in Malta coming to a close, I would like to impart some final words of wisdom to any future activists involved with this awesome organisation: cookies solve all problems. They are great during brainstorming sessions and especially useful to have on a stand.
Throughout my time with We Are, I have not only become a better activist, but a better person. It has truly been an honour to be part of this family and feel like my voice has indeed made a difference. I hope that this organisation can continue to do that for others as well as always being a place where people can express themselves without fear of being judged or excluded because of it.

This post also appears in our Annual Report for 2012-2013, which can be read and downloaded from our issuu account here:
http://issuu.com/wearemalta/docs/we_are_annual_report_12-13

Email ThisBlogThis!Share to TwitterShare to FacebookShare to Pinterest
Labels: blog of the month, history of we are, News

Our communications officer, Romina Tolu, gave the following speech at Pride March, on the 22nd June 2013. (Watch it on youtube, or read the transcript below!) 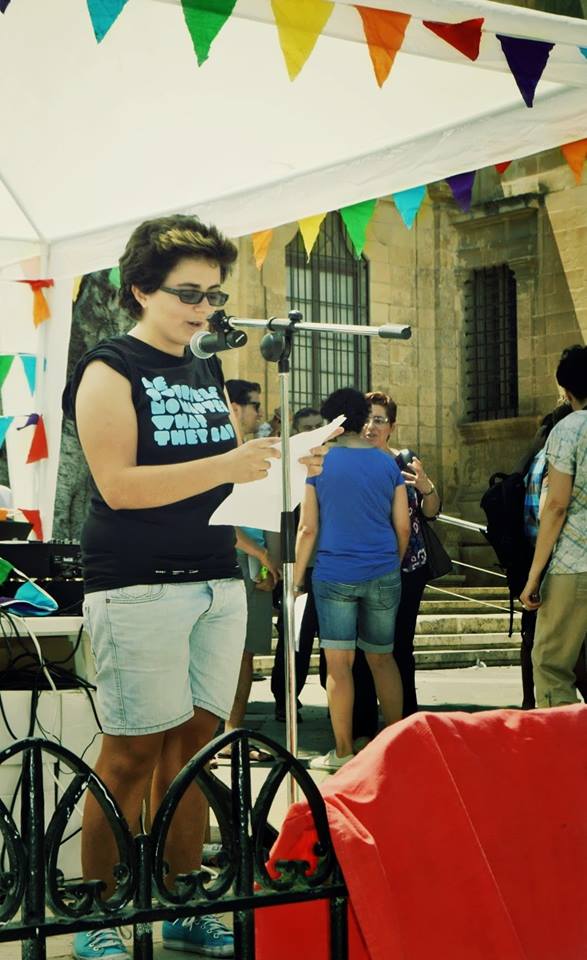 Pride was a big challenge for We Are this year. After three years of hard work within the university, student, and youth sectors, we felt that it is very unfortunate that Pride is happening in June. “Big deal” most said. But in reality we knew that it would be even harder than usual to encourage students to attend, as it is still exam period. It is after all already hard enough to increase participation during a normal period of time, let alone during exams.

So we chose to appeal to other student and youth organisations to join us today. It’s probably the first time that KSU – the University Students' Council – is at a pride march, publicly supporting LGBT rights.  Being the oldest national student union in Europe, we’re really happy and proud that they’re supporting us today, together with other youth organisations like KNZ – the National Youth Council (Malta).

In a recent survey published by the European Union Agency for Fundamental Rights it was found that of 18-24 year olds in Malta, the great percentage (97%) felt the need to be selectively open or hide their LGBT identity at school. 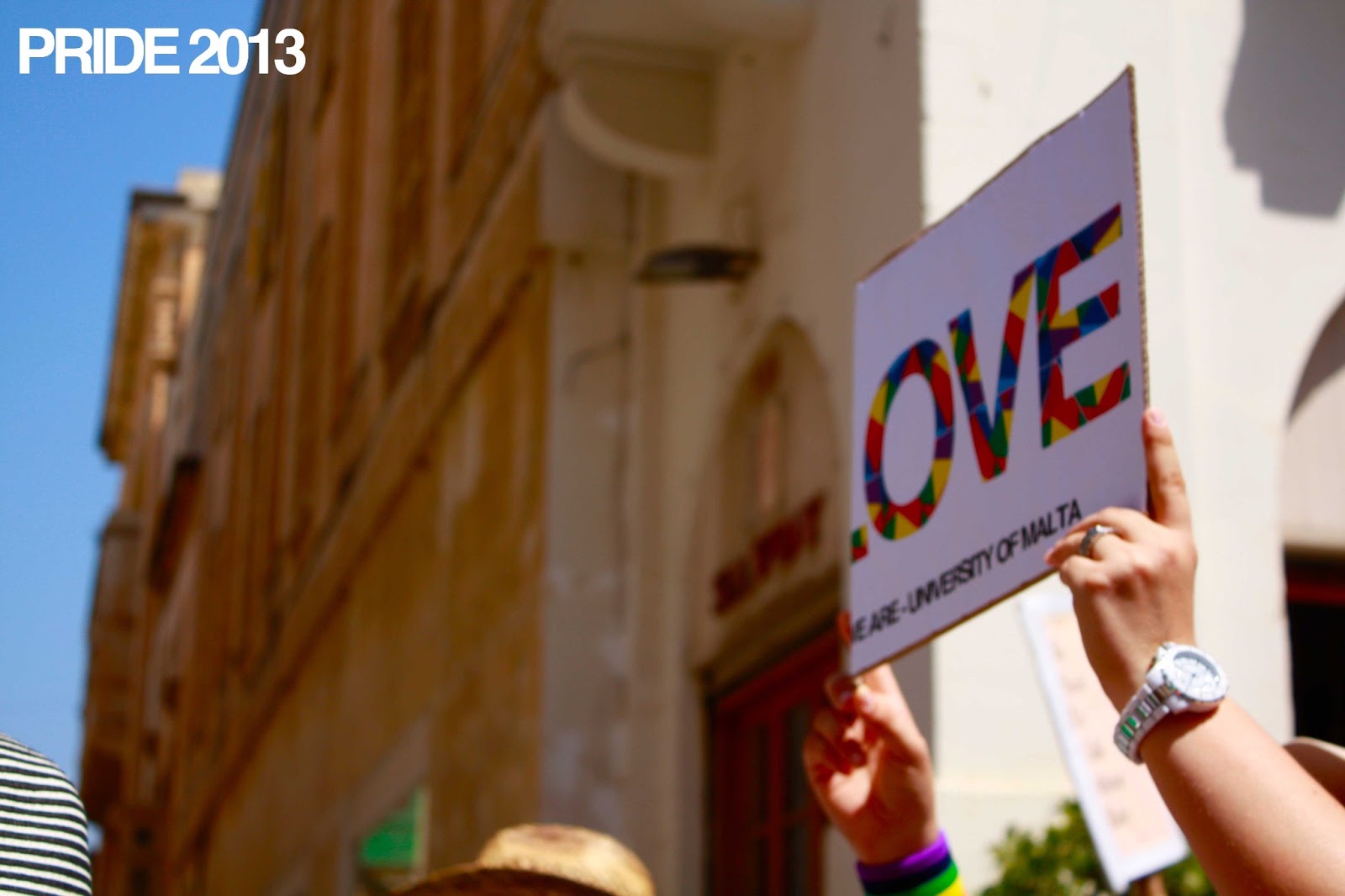 This statistic clearly indicates that many young people are scared to be out, because of the repercussions this might involve. Because of the rampant homophobia and transphobia that is still found in our Maltese educational institutions, and in our schools.

We should aim at eradicating homophobia and transphobia from the places which youth frequent, so that our future politicians, policy makers, doctors, educators, and parents, can be more accepting, more loving and more inclusive. So that one day we may live in a society in which one does not have to live with the same fears that many are surrounded by today.

Homophobia in education is a fact that needs to be challenged, and of course it cannot be challenged on our own.  it is only through the help of straight-allies and organisations that we can truly promote an idea of unity in diversity.

It has been great to participate in a pride where this was a possibility, where we have united with all these organisations and people, despite our differences, to take a stand. Where we had the opportunity to be ourselves, which is after all what pride is about. In which we have had an opportunity to celebrate our individual identities both as organisations and persons.

See you next year. 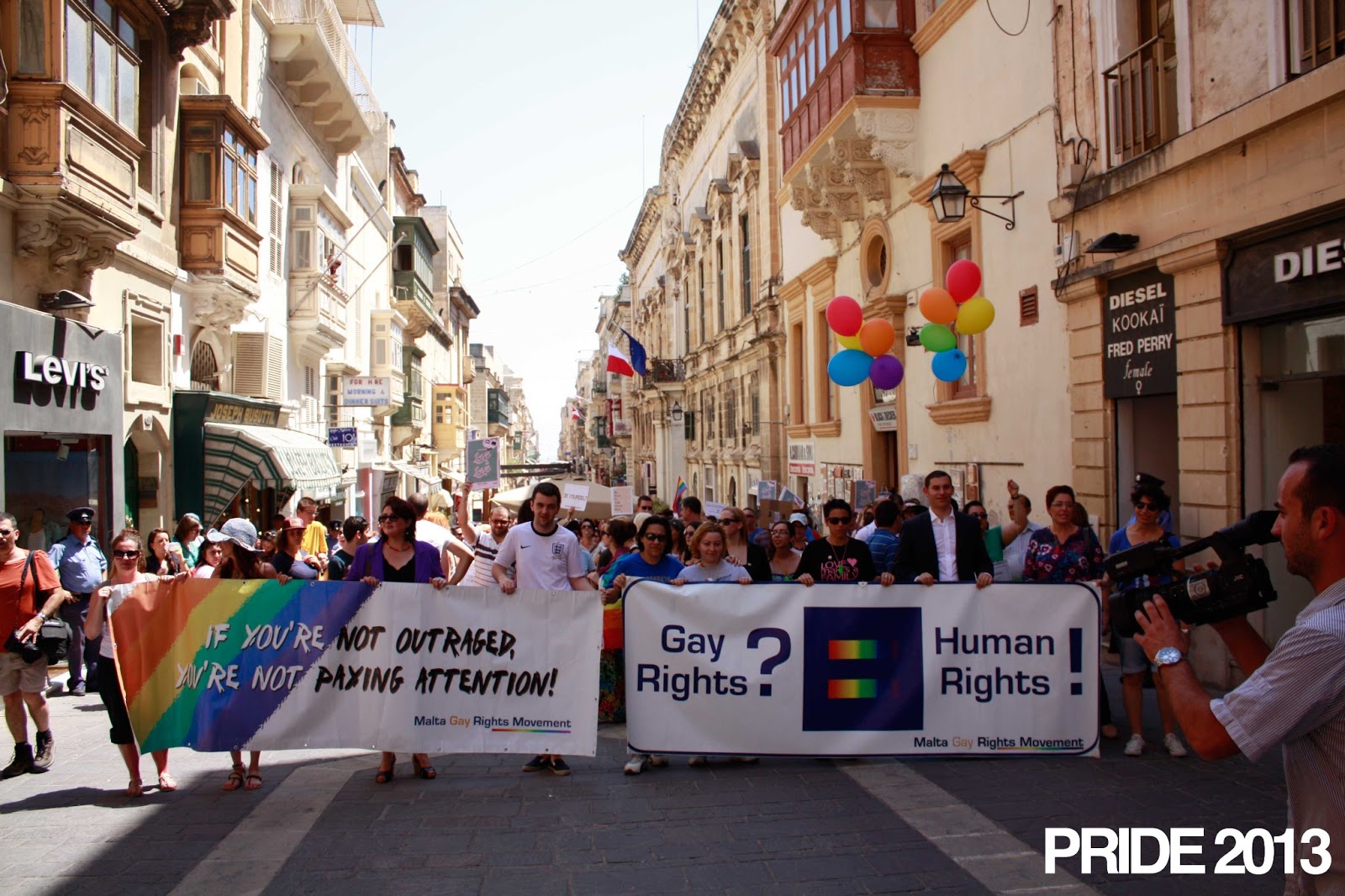 (Thanks to Anne Heywood for the first photo)

Blog of the Month: May: No one is in charge of your happiness, except you

No one is in charge of your happiness, except you
by Keith 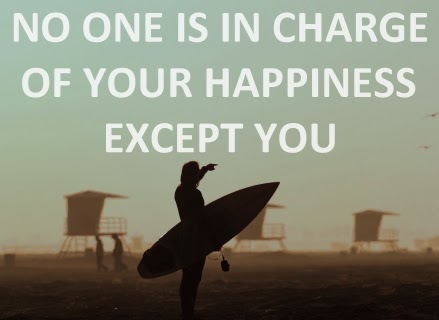 We are all different, unique in the most beautiful of ways!! Yet, the message inscribed within us from birth and repeated over and over again is one and the same - that of unjustified guilt and fear. For example, we all have different talents and interests. Hence, naturally different people express themselves in different ways and excel in different fields. Nonetheless, we're expected to do equally well in all academic subjects, whilst being tested solely in one manner. We feel guilty when we don't succeed this mammoth task, for we're told that it's because we're not committed enough. Similarly, we're told that we're sinners, simply by birth. We feel awful for such guilt, and make it hard on ourselves in order to make amends so as to alleviate the guilt of not being good enough. 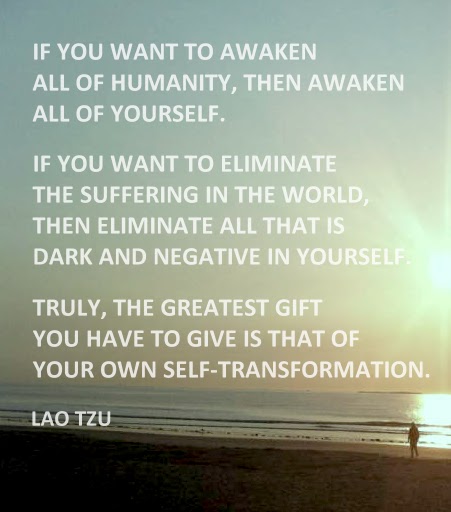 We can do anything we desire in our lives, anything that excites us and makes us itch, and become good enough at it as to also earn a living from it. Instead, we're guided to give it all up for an ‘8 to 5’ secure job we don’t like, for money. So, we do a job we don't like doing in order to earn enough money to live a life where living is doing a job we do not like doing. If we stop doing so however, we're injected with a fear of the future by those around us, advising us that if we do not work for money, we would not be able to buy more. Thus, perpetuating the belief that having more is what makes us happy, rather than doing that which fulfills us. In addition, as insider Roseanne Barr herself explains, institutions such as Hollywood maintain cultures of sexism and genderism in place by continually feeding it to the media, making up good money out of it. At the same time, we’re conditioned to be overrun by the fear of what others would think of us should we not subscribe to the roles, identity, or looks which Hollywood advocates.


Charles de Lint explains that, "no one else sees the world the way you do, no one else can tell the stories that you have to tell", apart from you. Should each one of us write a couple of paragraphs on what ‘joy’ truly means to us, no other answer would be an exact copy of yours, you are THAT unique!!  Tune into yourself, as Rumi stated, "let yourself be silently drawn by the strange pull of what you really love, it will not lead you astray". The more we love our own decisions, the less we require others to love them. Those who will judge us instead of understand, do not define who we are, their act only defines who they are. There’s no one to fight, only the fear and guilt instilled within which hold us from being our true Self. 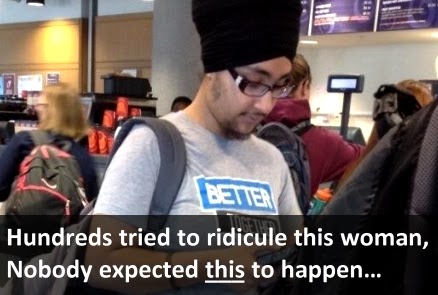 For those interested, below I share a link to the story of Balpreet Kaur, in the hopes that she is of inspiration to you as she was to me.

Link: http://www.cbc.ca/news/yourcommunity/2012/09/bearded-sikh-woman-teaches-reddit-a-lesson.html
at 12:58 PM No comments:

Email ThisBlogThis!Share to TwitterShare to FacebookShare to Pinterest
Labels: blog of the month

Press Statement on the International Day Against Homophobia and Transphobia

Today, the 17th May, We Are: The University of Malta LGBTQQI Organisation is marking the International Day Against Homophobia and Transphobia (IDAHO).
We Are has released a series of posters which show that anyone can stand against homophobia and transphobia. The posters depict students, lecturers, parents, and activists speaking out against homophobia, biphobia and transphobia.  The posters share positive messages about love and include slogans such as:  “You don’t have to be gay to support the cause”, “Our children’s sexuality doesn’t stop us from loving them unconditionally” and “Don’t let anyone define who you are, just be yourself”.
We Are will also be giving out carnations in the annual Flowers of Friendship event.  We’ll be handing out flowers at Giovanni Curmi Higher Secondary School, at Junior College, and at the University of Malta.  The action symbolizes our willingness to create bridges  and build dialogue with students about the importance of accepting people just the way they are, and the negative effects of homophobic and transphobic language and behaviour.   We are happy about the positive support received from the principals of Junior College and Giovanni Curmi Higher Secondary School and hope both sixth forms will continue to strive towards more inclusive and supportive environments for their students.

Gaby Gauci, Vice President of We Are says “we have taken positive steps this year towards some real change and have received great feedback in this respect.  Our campaign generated a lot of interest and is helping to raise awareness.  It’s nice to see parents being supportive, as well as straight friends and allies.”

Brenda Cutajar, Events Officer for We Are adds “On Sunday we organized a sports event to combat homophobia in sports. Unfortunately sports is one environment which is very hostile to LGBTQQI people and through our friendly sports events, which are open to all, we try to create a space where anyone can play sports and not feel pressured.”